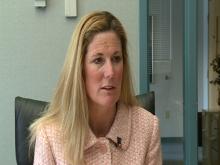 According to her campaign website, Tea Party Republican Kim Simac (pictured, right) says, “I believe in the preservation of the family and traditional family values, and will fight for legislation to protect them. To be strong, Wisconsin needs to support the traditional family structure…”

Simac, who has announced she’ll challenge Democratic State Senator Jim Holperin in a recall election that will likely be called against Holperin, really wants voters to believe she’s a “family values” candidate, but I’m wondering how Simac will reconcile her “family values” statements with her own personal history.

I’ve attempted to contact Kim Simac and her campaign press secretary, but it’s been four days and I’ve gotten no response from either regarding Simac’s apparent hypocrisy when it comes to “family values.”

Kudos to PolitiScoop for first breaking this story.