I don’t know if you were following what happened at the Wisconsin Capitol last night, but here is a summary: 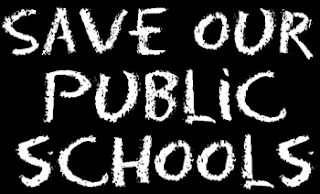 The Joint Finance Committee voted along party lines to put forward an education budget that will harm our kids into perpetuity. There IS increased funding (as opposed to the $150/pupil cuts the Governor wanted), but the increase is illusory; expansion of vouchers and changes to the funding formula mean that it’s difficult to tell how much of the “increase” will actually go to public schools. Waiting for the fiscal analysis of that. In the meantime, here’s how Wisconsin schools were sold out from under you while you were sleeping:

The budget includes the worst of what thousands of parents, school board members, administrators, advocacy groups, and grassroots local citizens spoke out against in droves at the hearings and in writing over the past months. In the guise of giving an increase to the public school budget, it creates a new, complicated, confusing & unwanted way of “accounting”
for private voucher school students that allows voucher money to be laundered through the public school budget. Districts that do not have voucher schools will lose even more money than they already do, and the voucher money will continue to come “off the top” as the program is expanded statewide. All over the state, communities will be forced to go to referendum and raise taxes to fund local schools. Many of these referenda will fail. The JFC voted against its constitutional obligation to fund public education at a level that allows uniform instruction at all schools. We are a state of haves and have-nots, and the “haves” got a shiny new gift last night.

Finally, the 51 items in the Omnibus Bill included all sorts of other things that will boggle your mind. Like allowing people with a bachelor’s degree and “experience” to become licensed teachers. And a Jim Crow-style Civics Test that will be required for graduation (despite the fact that we already have a civics requirement in Wisconsin). And changing the current school “report card” system to a star rating system (not joking). And allowing charter and voucher schools to take different tests than the ones required for public schools so that all of these measures can be used to cook the books and feed the hoax that our beloved public schools underperform the schools that are stealing their funding. And much, more more. Read the whole thing here: http://wispolitics.com/1006/150519Motion457.pdf

I just hope everyone gets the message from that civics test: democracy means you vote. And elections sure do have consequences.

Education is not a partisan issue.  That was brutally clear when citizens of every stripe testified at the JFC hearings, and school districts and boards all over the state spoke as one to let the JFC know exactly what they need and want to keep our schools great.  It’s brutally clear in the latest polls that show public education is the #1 issue for Wisconsin taxpayers and  78% oppose cuts to schools.  For the first time ever, a majority would rather see a raise in taxes than cutting funds to schools.

Given the climate of bipartisan consensus in the state, it was shocking to see party line votes on a budget that so clearly is deaf to the will of the people last night.  Every single person in this state, regardless of party or politics, should be outraged at these attacks on local control and the democratic process.

Be prepared to fight these things tooth and nail. Organize locally.  Speak up and speak out and speak loudly.  They’re not law until the governor signs the bill.

There is hope — when we speak as one, we cannot be ignored.


Our children have never needed us to speak up more.