Sometimes events aren’t that hard to figure out.  The violence in the Milwaukee Public Schools for instance.

A string of killings involving Milwaukee Public Schools students has the system’s superintendent calling for the community to help combat urban youth violence.

Four MPS students have been killed in off-campus shootings in the past few months. The earliest, Dequan Williams, 18, of Lad Lake School was shot on Nov. 30 near the intersection of N. 36th and W. Vliet Streets and died from his wounds a month later.

Most recently, 18-year-old Mark Burt of Banner Preparatory School was shot in the head and killed on Feb. 10 in the 2700 block of S. 12th Street.

is a direct result of this: 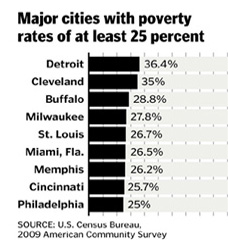 which is driven by this:

Nationwide, African American unemployment stands at around 16 percent, significantly higher than the overall national average. It’s also at a level similar to those in the Depression-era.

which is being exacerbated by the economic policies of things like this:

This causal chain is not hard to work out.  Bad economic policies create unemployment which results in poverty which in turn generates violence in the community.  This is not some kind of morality play where Milwaukee’s youth represent some kind of moral failure.  This is a simple result of economic cause-and-effect.  As much as the righties like to blame the victims of their economic terrorism, these young men and women who see no future for themselves in Milwaukee are lashing out at the only available targets: each other.

This is not rocket surgery.  It’s not that tough to figure out.