Of the more interesting characters emblematic of the “Horror” season are Vincent Price and Peter Lorre. For a Happy  Halloween to all, a short montage honoring them both: 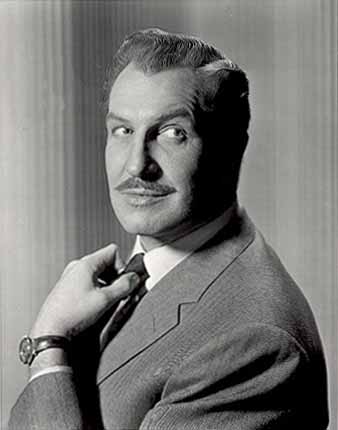 Some Vincent Price trivia nabbed from Wikipedia and IMDb:

“According to Price, when he and Peter Lorre went to view Bela Lugosi’s body at Lugosi’s funeral, Lorre, upon seeing Lugosi dressed in his famous Dracula cape, quipped, “Do you think we should drive a stake through his heart just in case?”

“In 1948, Price joined Fanny Brice, Edward G. Robinson, and other art lovers to open his museum in Hollywood called the Modern Institute of Art. It closed within two years because of lack of funds.”

“When Lillian Gish first met him on ‘The Whales of August,’ she said, ‘I finally got my Prince Albert,’ a reference to ‘Victoria Regina.’

“Price voted for Republican candidate Wendell Wilkie in the 1940 presidential election, since both his parents were conservatives. Shortly thereafter, his political views altered completely, and he later became one of the most active liberal Democrats in Hollywood.”

The following documentary runs just under an hour. If you’re a Vincent Price fan as I am and you have an hour to spare, it’s a fair documentary and worth the hour spent. Vincent was a fascinating individual with a bizarre, but iconic screen life. This documentary illustrates a little bit of both.

Another of my all time favorite “horror” actors is Peter Lorre.  Some trivia nabbed from Wikipedia and IMDb:

“Was the very first James Bond villain; he played Le Chiffre in a 1954 version of Casino Royale on the TV show ‘Climax!”

“Alfred Hitchcock was reputed to have said that one of Lorre’s nicknames was ‘The Walking Overcoat.’ This moniker was given to Lorre because he used to rehearse in a floor-length overcoat, no matter what the season of the year was.”

“About 1977, his daughter Catharine Lorre was almost abducted in Los Angeles by the serial killers known as the Hillside Stranglers. She was stopped by Kenneth Bianchi and Angelo Buono, who were impersonating policemen. When they realized she was Lorre’s daughter, they let her go because the actor was famous for playing a serial killer in Fritz Lang’s “M.” Catherine Lorre didn’t realize they were the real killers until after they were arrested.”

“When the Nazis came to power in Germany in 1933, Lorre took refuge first in Paris and then London, where he was noticed by Ivor Montagu, Alfred Hitchcock‘s associate producer for The Man Who Knew Too Much (1934), who reminded the director about Lorre’s performance in M. They first considered him to play the assassin in the film, but wanted to use him in a larger role, despite his limited command of English at the time,[3] which Lorre overcame by learning much of his part phonetically. He also was featured in Hitchcock’s Secret Agent (1936).

The Nazi propaganda film The Eternal Jew (1940) uses an excerpt from the climactic scene in M in which child-murderer Lorre is trapped by vengeful citizens. His passionate plea that his compulsion is uncontrollable, says the voice-over, makes him sympathetic and is an example of attempts by Jewish artists to corrupt public morals.”

“Lorre had suffered for years from chronic gallbladder troubles, for which doctors had prescribed morphine. Lorre became trapped between the constant pain and addiction to morphine to ease the problem. It was during the period of the Mr. Moto films that Lorre struggled and overcame his addiction.”

If you’re a Peter Lorre fan as much as I am, the following documentary will be a joyous distraction. It is also just under an hour and well worth the watch ~ an intriguing life story of an intriguing individual: