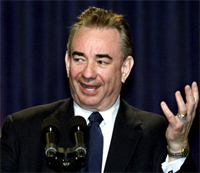 Well, if you believe WISN.com, Tommy Thompson could very well throw his hat into the ring in 2010. Thompson told 12 News he’s currently looking for other candidates to step up before he throws his hat in the ring, a statement that comes only days after Scott Walker formally announced his intention to run for the seat. Thompson also offered Walker his best wishes, but stopped short of endorsing Walker, and Thompson added he was looking forward to other Republicans entering the race.

To be honest, I’m not at all surprised to read that Tommy Thompson is considering a run for governor. In fact, I predicted Thompson would run back in November 2008. What’s more, I seem to recall a lot of speculation Thompson would throw his name into the race back in 2006, only to stay out and watch Mark Green get clobbered by Governor Jim Doyle. Despite my liberal leanings, I’d actually love to see Tommy Thompson run for governor in 2010, because his candidacy would certainly make for a more interesting Republican primary. What’s more, if Thompson were victorious in the Republican primary, I’d love to see him get his butt handed to him by Governor Doyle in the general election – maybe then he’d get the message and fade quietly into the background of Wisconsin politics.

H/T to The Chief.

21 thoughts on “Tommy Thompson to run for governor?”