There’s been much ridiculous  bloviation on the right wing about how the Democrats are misusing the recall and that the originators of the law and the concept of the recall would be shocked, shocked at how it was being used to unseat such a fine, upstanding Governor like Scott Walker (I think I just threw up in my mouth a little bit…).

As Ed Fallone pointed out, there is simply no historical basis for the WPRI argument.  None.  Nada.  Zip.  It’s a complete fabrication.  An Orwellian spin on historical facts (“We have always been at war with Eurasia!”)

Taking my cue from Capper over at Cognitive Dissidence, I decided to do a little digging into an old headline he’d included in his post: 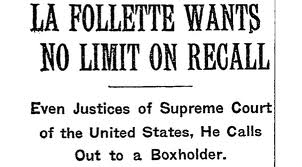 Turns out, this is from a New York Times article from January 23rd, 1912 that reported on a speech by Senator Robert M. La Follette at Carnegie Hall in New York City.  What struck me is both the headline (La Follette Wants No Limit on Recall) as well as this passage which expands on the point Dr. Fallone made in his blog post.

The third, fourth and fifth propositions favored by the Progressive are the iniative, the referendum and the recall.

“How about Judges?” a man in the gallery asked.

“I paused for you to ask me that,” the Senator replied.  “You would not have asked it, however, had you known me.  I gladly answer it, and would have whether you asked me the question or not.  I answer yes.  I am in favor of extending the recall to the judiciary.”

This answer which the Senator [hurled] out set the audience wild, and the cheering lasted more than a minute.

“But I am going to disappoint you,” the Senator continued, when he got a chance to resume.  “In the recall as I would apply it to the judiciary it would have some restrictions that would not apply to other officials.  I do not deify the bench; I do not think it is divine, but when a court forgets that its function is to administer the law and goes to legislating, I think that it is a sufficient justification for the recall, and I mean, now, the Supreme Court of the United States, when they wrote into the Sherman anti-trust law the words that Congress had refused to write into it they went outside their functions.”

La Follette, one of the leading Progressives voices favoring the open and frequent use of the Recall to keep elected officials in line, wanted fewer restrictions on the recall of non-judicial officials, contrary to what the right-wing bloggers would have you believe.  The Progressives were strong believers in a tight leash on elected officials and the Recall was an instrumental part of that system of control.

La Follette wrote in his own campaign material that the Recall should be used to keep elected officials in line.

Senator La Follettte has favored and now favors the recall.

By the recall, a faithless public official may be retired without waiting for the evil to be fully consummated.

Under such a law, the public official will no longer betray his constituency.

Downward revision of the tariff in the platform will not mean upward revision in accomplishment. The official will no longer rely on the people forgetting before election day rolls around. He will face the immediate dishonor he deserves.

All this noise about how the Democrats are misusing the process is simply, and completely, bullshit.